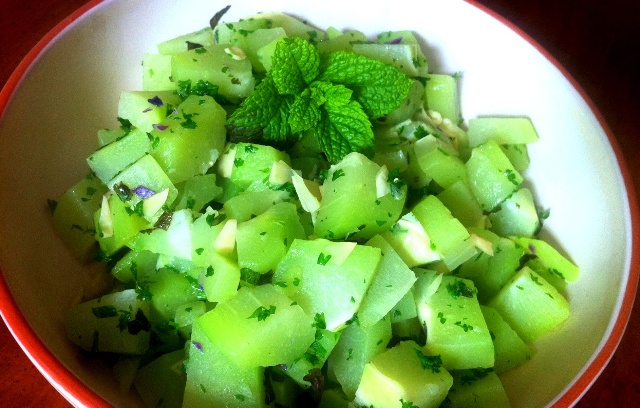 If you ask me to think about the foods of my childhood, Mauritian foods like choko (or chou chou as we say in Mauritius) curries and lentils, pharatahs, pineapples and my grandmère’s second-to-none chocolate cake all feature high on the list. We’re French Mauritian on my mum’s side of the family, originally from Alsace and chokos are a great, inexpensive staple in Mauritius, so whenever we were there visiting, it was at the table.

“Chayote”, originally from Central America, was introduced to Australia by early settlers. Chokos for some reason here in Australia are a bit of a culinary laughing stock. In Good Living a few years ago, a choko feature was issued, only to turn out to have been an April Fool’s edition. There my family were, all excited for a minute there that our beloved choko was finally getting the praise it deserved. As one of my fabulous facebook page fans  Jayne Hughes from Eco Babe said: “Chokos are a rather unloved Australian gourd/melon. It was usually grown over the septic tank or chook shed for shading and no-one ever knew how to cook it tastily. It has a famous saying in the Australian vernacular “About as useful as a bag of chokos” ie of no use at all…” So now, to rehabilitating everyone onto giving them ago.

The flavour is super mild and lends itself to lots of other stronger flavours you’re preparing. All the articles in Australia always say to peel and deseed, but in Mauritius, we give the seed to a chosen person to bring them luck! I love it. There are so many vitamins including most of the B’s, C, E and K, 7 essential minerals, , amino acids. It’s a great eye mask, acting similarly to Aloe Vera, and here is the way I cook it.

I’ve done a delicious cold soup also, using my beloved choko here if you fancy checking it out. I hope you decided to give them another try and let me know how you go! I’ve even got a gratin coming up. You will LOVE choko by the time i’m done!