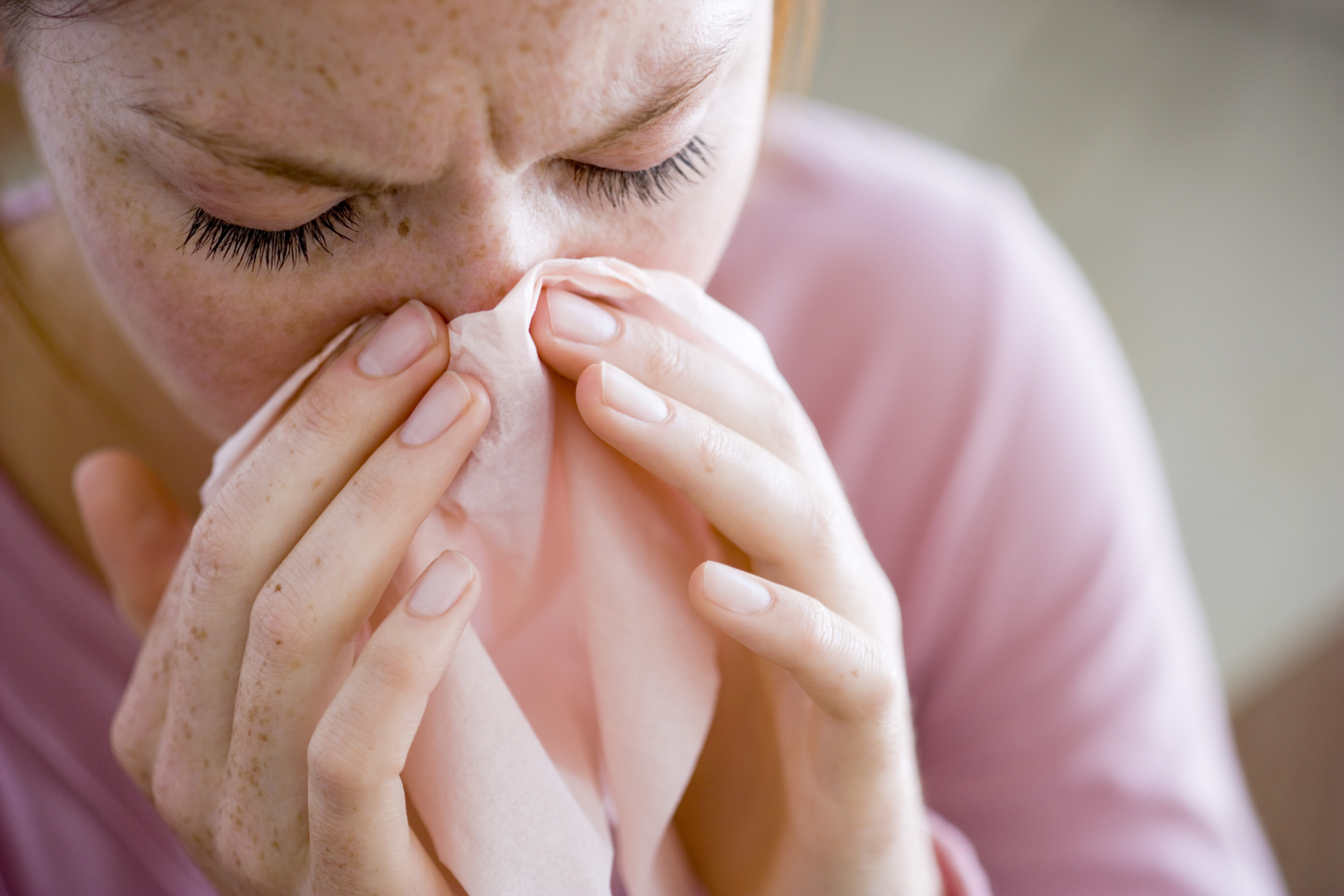 Are you or is someone you know always getting a cold or flu? It’s great if yes, that you might be trying to treat them naturally, build your immune system and get stronger, but what if you’re physically doomed to get repeatedly sick? What if the real issue wasn’t the cold or flu but something deeper. I used to get sick all the time in my 20s and that also happened to co-incide with when my PCOS (polycystic ovarian syndrome) was at its most severe in terms of symptom manifestation. How are the two linked? Well, it turns out hormonal imbalance can be a very common underlying cause for repeated cold and flu in adults. It’s not the ONLY underlying reason, but being that it’s one and a rather left field one at that, Martin Mayer, biomedical scientist from Concept Holistic Health Mosman, is here to shed a little light with this case study this week of a 45 year old woman.
A 45 year old lady presented in my clinic with cold & flu symptoms.
She said that she would have a sore throat lasting sometimes for weeks. She would recover for a few weeks and the same thing would then happen again and again in a vicious cycle.
I asked her more questions: She said that her sleep was interrupted, she felt run down, had no libido, was emotionally unstable, was significantly overweight and has low self esteem… just NOT happy at all.
She said that her menstrual cycle would be all over the place and she mentioned that she had had fibroids in the past. She said that “something has changed recently in her body” but she does not know what it was.
The first thing one must do here is run tests. Our tests are unfortunately not covered by medicare, but on the other hand, private testing gives you the freedom to see exactly what’s going on and get exactly the details you want tested.
I assessed her Thyroid, neurotransmitters, hormones, HbA1c (bood sugar) and liver.
These tests revealed elevated TSH 3.8 ( Thyroid… but still within the reference range) and it also brought up elevated thyroid antibodies. There was significant deficiency of DHEA hormone, as well as testosterone and non detectable available testosterone (free testosterone) and  high serotonin and oestrogen. The HbA1c was elevated (6.0%) and liver function compromised.
She said that her doctor measured all these things already in the past and could not find anything wrong with her thyroid or hormones. She said her doctor told her to take the cold and flue tablets early enough at first sign and not wait too long. He kept on prescribing antibiotics when an infection presented and then also told her to do more exercise and eat less and the rest would eventually follow.
She came to us, because she was sick of antibiotics and she was finding exercise difficult because her energy was so low. She is eating good things already anyway and she does not know why she cannot lose weight. She said that she was very fit many years ago and very much active in the past, may be a bit “too active”.
This is an example of a “lost” case in standard mainstream medicine. I selected this case because it shows that the symptoms of not being able to overcome cold & flu is actually not the real issue but just the symptoms of several profound health issues this woman had. In many cases it is not just the case of irrelevant testing performed but also a misinterpretation of the data: If someone focuses only on data which is beyond the reference ranges pathology tests will have less to say. The lower or higher ends of the range are significant – they might not be presenting emergency symptoms, but certainly symptomatic enough to make someone’s life less than optimal in terms of health and wellbeing.
In my view this lady had one profound underlying issue: Adrenal fatigue.
The catch is that actually many doctors suggest cold and flu medication when they have a cold, but are not aware, and therefore don’t go to look at the DHEA and the Testosterone readings – the levels of which will have a major impact on the immune system if not what they should be. It’s the same with the thyroid. A hypo or subclinical hypo (under functioning) thyroid will not help at all with ongoing immune weakness. This might show a ‘normal’ TSH reading in a thyroid test in terms of the range of what is deemed normal, and this is where it gets confusing.
How did I treat her? I supported the adrenal glands and corrected -most importantly- the DHEA level. The effect of that was that the thyroid became more active, supported her insulin excretion which was too sluggish, helped her with the oestrogen metabolism and after 1 week she was already in good spirits and had much better physical strength. She felt encouraged from there on to do some fitness training and things started to fall into place. She told me that since her DHEA level had been treated she felt so much more focused and less depressed, and YES, by the way she hadn’t had a cold and flu symptom either!! This is not a coincidence… 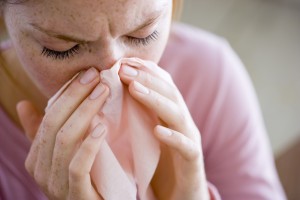 pic credit: ohbabyblog.com
So if you’ve been trying to get to the bottom of repeated cold and flu symptoms, why not get some hormone and thyroid testing which you can do through your doctor? Be sure to request DHEA level which isn’t always automatically tested for. With your thyroid testing, you must ask for TSH, T3, T4 and antibodies, because just having the TSH picture isn’t enough. This type of testing you can get through medicare in Australia and then take to your naturopath / holistic doctor to give you a second opinion.  If you’re in Sydney then you could book to see Martin, where the private testing goes a level deeper into the information gathered.
Of course there will be sometimes when you just get sick. It’s not because of anything other than being unlucky sometimes! I myself was such a person struck with a virus on the weekend. I followed a Vitamin D, Lysine, Astragalus protocol and took some medicinal mushrooms, lots of cultured veggies and natural vitamin C, and drank plenty of turmeric and honey tea through the feverish 3 days. I even took panadol to help me rest a couple of times. Fever broke day 4. I got better super quickly. Moving on. In my 20s, such things would linger and repeat themselves again and again before finally ending. I actually couldn’t quite remember the last time I’d been sick. I like that about life these days! All from digging much deeper for that root cause.
Please keep in mind this is one case study and not the underlying reason for ALL cold and flu recurrent cases. You might have a leaky gut, causing immune function challenges. You might be eating too much sugar, feeding those ‘bad soldiers’ in your gut exactly what they need to grow in numbers and strike you down. You might not be getting enough sleep and simply be too run down… There are other reasons, but I find this case study Martin has presented to be really interesting and worthy of a share, as many women are battling this hidden beast.
What kinds of topics would you like Martin to present a case study on? Don’t hesitate to leave a comment or get in touch.
Here’s to uncovering real problems behind repeated ills, whatever the cause may be, rather than buying another packet of ‘soldiering on’. 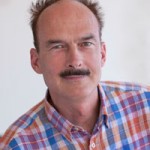 Martin joined Concept Holistic Health in 1997 as a Biomedical Scientist. His particular clinical interests lie in molecular biology including DNA biomarkers, pharmacogenetics, very early disease and cancer detection and environmental toxicology. He is at the leading-edge of science in many of these areas, being able to offer testing not available elsewhere in Australia.

Martin puts science into the holistic context, interprets pathology reports into understandable language and brings pathology alive to everyone.

DISCLAIMER: THIS IS NOT INTENDED AS MEDICAL ADVICE. IF YOU ARE EXPERIENCING ANY SUCH SYMPTOMS, PLEASE SEE YOUR HEALTH CARE PRACTITIONER.

What’s my relationship with Concept? Christine Schwedhelm is my naturopath of 10 years, with nearly 30 years experience and I really like the scientific and concrete evidence approach to healing, before throwing a bunch of pills, albeit natural ones, at the problem. Being a nerd, I take comfort in knowing that, while the testing side of things isn’t ‘free’ because it’s a private lab, at least we know exactly what to treat, given so many symptoms can overlap across various problems. Don’t think of it as an expense, but rather an investment when it comes to the blood tests.

I’ve particularly loved the psychotherapy / counselling element during the time of quitting smoking nearly 10 years ago now, or learning relaxation, or going through a hard time as a new mum. Anyway, Martin and I got chatting as they didn’t have a blog, about providing some free information and investigative pieces here, and I said, of course, yes! I take a nominal fee to cover my couple of hours editing and preparing the post for publishing and am really thrilled to bring this new dimension to the blog to life.