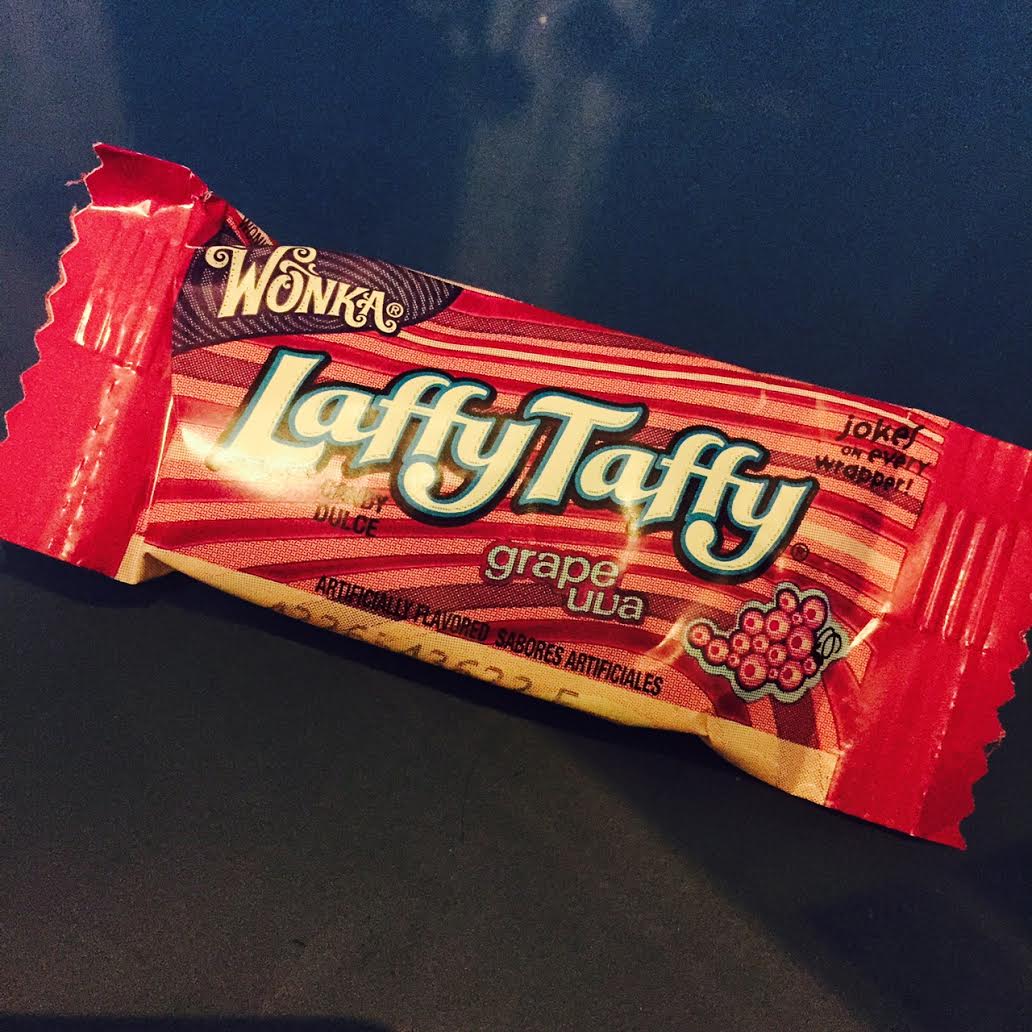 Sometimes you come across a lolly. I don’t believe it is anyone’s fault for grabbing things like this for putting together party bags, or grabbing for a kids’ party or play date, it first off has to be said. We only know what we know, and we do what the norm is to do. Sometimes it’s because of illness that we wake up, sometimes because a documentary touched us that piqued our curiosity, but if we’ve not been exposed to any of this stuff, we might think we’re safe to assume that if it’s on the shelf, then it’s been approved through rigorous testing and safety standards and isn’t that fair enough? I believe it should be.

Sadly, it just isn’t the case and there’s some crazy stuff out there these days – especially compared to even 20 – 30 years ago, and if I can help raise awareness, then I will.

Wonka Laffy Taffy… Grape flavoured. I always turn these things around and scan ingredients to help anyone down the track if they ever ask me about that brand – the more I can help, the better. I was in no way prepared for just how bad this innocent little number would be. Sit down, I’m not going to hold back. Here’s the breakdown.

It has in the top right corner there on the front “Jokes on every wrapper” – I believe you’ll find the joke is IN everywrapper. A super cruel joke. 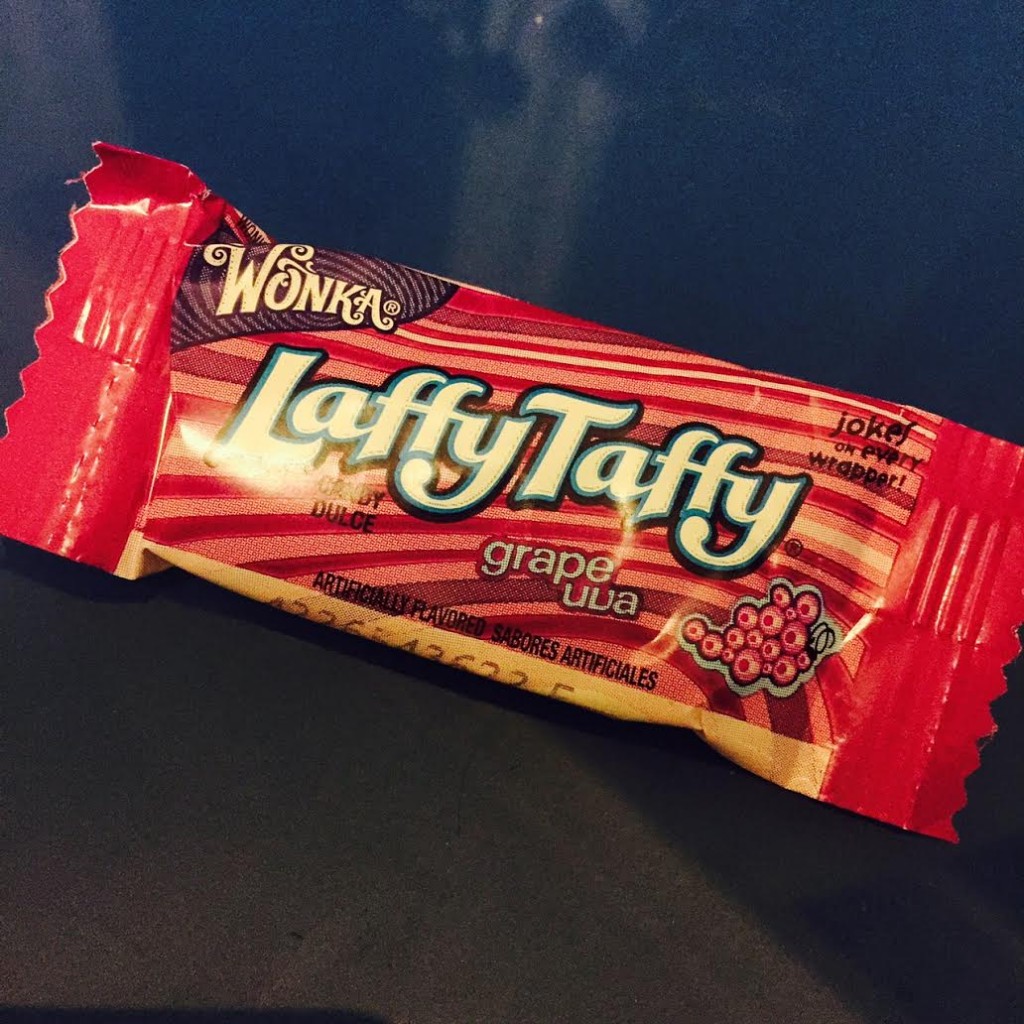 Corn Syrup. Many people in Australia thing “oh, we don’t have to worry about GM foods here”. Well, sadly we do and if you buy packaged foods from big companies, or companies owned by big companies (Shop Ethical app will help you with that info) then yes, you do have to worry. There are GM ingredients in half the supermarket. Corn syrup in an imported American lolly is most certainly genetically modified origin. 88% of US corn is now genetically modified. If you want a crash course in genetic midification – history and effect of the planet, this talk “Planet on a plate” is the best hour you can spend on getting up to speed. The sooner we know, the sooner we can fix this! Want a great local resource on GMOs with some simple definitions created by qualified people in the know? READ HERE.

Sugar. When it’s just ‘sugar’ written on an ingredient list and again, from an American company, it is most often sugar beet, 91% of which is genetically modified. When I was a kid the lollies were plain old cane sugar. A little sugar is the least of our problems compared to this weirdness.

Palm Oil. Unless it says ‘certified sustainable’ which even then is sadly often questionable, then I’m afraid it’s causing some serious distruction to ecosystems, namely the animal life such as the beautiful orang utan population. For more information on that HEAD HERE.

Mono and Diglycerides – Fats used to extend a products’ shelf like, made from either soybean oil, palm oil or cotton seed oil… So GM, or forest destroying, or GM. Awesome!

Hydrogenated Cottonseed oil – Oh. My. Wow. When I thought it couldn’t get worse! Once again, genetically modified for certain, given it’s an American company and cotton is over 80% GM now in the US. AND hydrogenated fats are trans fats – The worst kind of inflammatory fats around!

Salt. Something recognisable. Wow. I’m going to take a guess and say I don’t think it’s celtic sea salt or himalayan though.

Artificial Flavour – Could be anything!

These two colours are banned for use in food production throughout Europe. This list of adverse effects are ‘possible’ and ‘can be caused by’, they are not definite, I do want to make clear. My source for their documented effects based on research studies source, is Chemical Maze.

And that’s it. That’s what’s in there.

There’s a first for everything I guess, including swearing on my blog: FUCKITY FUCK FUCK FUCK. What the fuck is this little processed packet of weirdness? It’s actually the world’s agricultural, manufacturing giants and health problems in a purple plastic wrap. It’s sad. It’s horrible. It’s so wrong that this be revered as a ‘good time’.

Just because this has become common, let’s not start calling this normal. If only this was just a couple of times per year… then our bodies might stand a chance to expell them, as we are natural detoxifiers, true – but it’s not just a few times a year anymore. It’s after sports practice and sports games these days. It’s after school, it’s every weekend, it’s at the movies, it’s at a play date, it’s at a sleep over… It’s everywhere, all the time, every day. This weirdo packet and so many like it. This is something that global health statistics tell us we’re not coping too well with at all.

Let’s not feel we are powerless to the pull of culture sending us towards these sorts of things being freely distributed to children at a party. Our kids and our planet needs us to make the decision to rise above this weirdness and say NO FRICKING WAY is this normal.

Let’s be people who look at ingredients of things before deciding whether it is fit for a child or anyone for that matter. We cannot trust these companies to make good choices for us, so WE have to learn a bit and make better choices. There is always a better choice to make. This does NOT mean no treats. It means better treats.

Let’s be people that aren’t so disconnected from nature that we find this more appealing than a delicious, ripe in season strawberry or home made cookie or cupcake from a shop that pride themselves in real ingredients.

If you’re thinking: Where on earth do I start? I had no idea it was this bad. I am panicked and ashamed and man o man this is crazy…

Then start here and read my blog post ‘It’s time to redefine treats’.

It’s also a time to emphasise here, that there are packaged lollies and then there are packaged lollies. There’s always a better choice to make. There was also a Freddo Frog in the bag – brilliant. Innocent little chocolate compared to this weirdo thingo. Sure Cadbury is owned by a huge giant Mondelez who doesn’t exactly have our health and prosperity in mind, but for the sake of providing an idea and a gateway to investigating better party bag options, for those who still want to provide and enjoy them, there is ALWAYS a better choice, and little Fredo is one.

I am of the belief (probably because I used to eat pop tarts, chew hubba bubba and hoover microwave popcorn) that we cannot feel guilty about what we didn’t know before. We must just get excited about what we can change today and put our energy into positive action mode.

If you’re keen to get in the kitchen and explore new and delicious options, consider grabbing my e book for only $10 with loads of recipes and simple steps to going wholefood in the treats department, as I created it for precisely you in mind. This isn’t a sales pitch blog post, this is about breaking some bad news and not wanting to leave you there thinking ‘Crap, where to now, then?’.

Then, follow amazing blogs like these (and so many more!) to inspire you to make super simple, delicious treats once a week for the week;s lunchboxes and after school play dates, along with great party foods and more.

Lisa Corduff In the kitchen

Or dare I say my blog for treat ideas (recipe tab, and ‘sweet treats’ under that drop down. Hundreds of good things in there!)

And then say to yourself this…

I am taking the power back. This isn’t normal. We’ve normalised it, sure, but it just isn’t normal. This is harmful to not only us and our health, but the health of the whole planet and I have the power – yes little old me – to create a ripple effect that makes this little weirdo packet WEIRD by definition from now on, not TREAT by definition.

We can do this guys. We kind of have to, don’t you think?

I’m here if you need me. Make my “I can’t believe it’s not milo” and contemplate your next exciting change while you enjoy a mug of it with real, whole milk or your favourite alternative.

p.s The Jokes on the wrapper – I bet you’re dying to know what they were, right?

What is a vampire’s favourite drink?

What do you call a cold puppy sitting on a rabbit?

A chilli dog sitting on a bun.

Oh dear… Nearly as bad as the lolly!