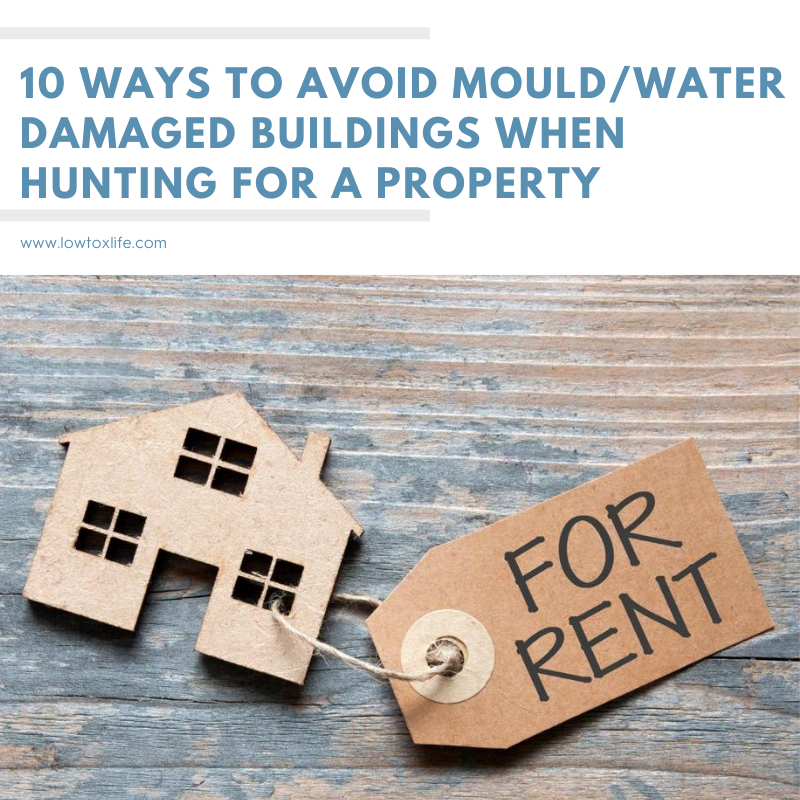 Keen to avoid mould/water damage in your next rental or purchase? While it’s not entirely possible short of inviting a mould technician, building biologist and remediator to the inspection to absolutely guarantee that you’re going to be mould-free, there ARE a few signs something isn’t quite right. Naturally, you have more time on your side if you’re considering buying, but that’s absolutely not to say there aren’t some quick visual/smell cues you can’t look out for as a renter.

Being someone hit by mould illness myself (and still working on recovering – a lot more on this here where I chronicle my entire story) I understand the importance of spotting these homes early, now, instead of living in one for a year and another for 8 years before realising the damage that a water-damaged building can cause to someone’s health! I’ve put together 10 things to look for when renting a house so you can work to minimise the chance of exposure to mould through a water-damaged building.

But first, what is mould?

Mould is part of a group of very common organisms called fungi that also include mushrooms and yeast. It is present virtually everywhere, both indoors and outdoors but thrives in damp areas and water-damaged homes that are lacking adequate ventilation, including walls/ wallpaper, ceilings, bathroom tiles, carpets (especially those with jute backing), insulation material and wood. There are different species and over time, science is discovering that the different types can impact us in different ways from allergies to neurotoxicity to carcinogenic impact. If you’re familiar with basics on gut health and knowing that some pathogens exist happily in the gut and can even be useful in small colony size, but it’s when they proliferate and take over from the ‘good guys’ that they cause havoc, it’s essentially the same with mould and the mycotoxins they produce. At very low levels they’re part of a healthy functioning ecosystem, but allowed to proliferate, they can cause havoc on allergies, and a chronic inflammatory response from the mycotoxin exposure (read my post on that, linked above, to learn more detail) .

Why should we be avoiding mould and water damage?

In case you’ve missed it or you’re fairly new to Low Tox Life, I was chronically ill with mould illness as a result of living in a string of rentals from my early 30s onwards, which left me exposed to toxic levels of mould. So why are we so cautious of mould and water-damaged buildings? Well, as I mentioned above, in order to reproduce and proliferate, mould requires a damp environment. Water damage and damp occurs in buildings when a pipe or roof is leaking and/or a building has not been built with the correct ‘wet area’ foundations to enable optimal ventilation and drying. The recurrent water dripping or leaking in one place results in an excessively damp area, often hidden behind the paint, foundational walls, under furniture or in nooks and crannies of a building. If you’re fortunate – or unfortunate – enough to discover the actual site it can be a pretty shocking and menacing looking thing.

Once this icky toxic mould is growing it produces tiny particles called spores. Spores are carried through the air and may cause health problems if inhaled by people who are sensitive or allergic to them. Common symptoms look like an unexplained running or blocked nose, irritation of the eyes and skin and sometimes wheezing. If you’re one of the unlucky folk who is highly susceptible to mould illness, your symptoms might be far more severe, like a racing heart, diarrhoea, nervous system issues, electric shock, migraines, mood swings, depression, joint and muscle aches and twitching and chronic unexplained illness… just to name a few. While it only seems to be about a quarter of the population that is affected, it is said by leading doctors such as Dr Ann Shippy who I had on the podcast discussing mould, that it does affect the whole population, just to varying degrees dependant on individual factors. You might also want to listen to the show I did with Dr Sandeep Gupta on mould and CIRS (chronic inflammatory response syndrome)

10 things to look for when renting a house

So now that you have a general understanding of why landing yourself a low-to-no mould home is important, here are 10 key signs you want to look for when inspecting your next rental or potential home purchase.

1. Visible mould. Seems obvious but it’s definitely the first red flag – if mould is visible, then chances are there’s far more hidden under the surface. Look behind cupboards, shine your phone torch into air vents/air conditioners, curtains (back and front) and blinds, in the corners of rooms, in built-in wardrobes, around edges of the bathroom, under the sink, behind couches, on widows and along window frames. Leave no stone unturned! Mould can be black, green, brown, white or furry spots. 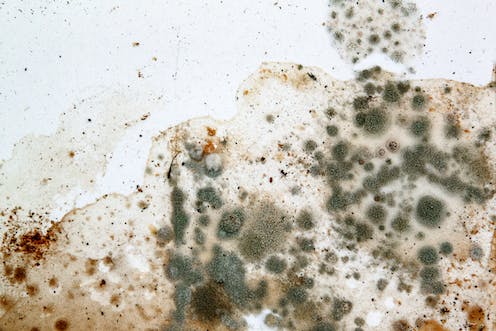 2. Broken pipes and downpipes around the building, under the sink or in the laundry area/bathroom/kitchen areas.  While you can’t see pipes behind walls, there is the opportunity to assess the health of visible ones on an inspection. The most common offender of these is plastic water supply lines to sinks and toilets, which newer buildings tend to use more. (Tip: Copper, which older buildings tend to use, almost never leaks. Galvanized steel is another sturdy material in this regard.)

3. Mildew (a surface fungus) is typically a grey or white colour – that can become black as the fungus grows. It’s commonly found in bathrooms and laundry areas as a result of poor ventilation.

4. Condensation, much like mildew, is an indicator of dampness. It looks like water running down walls, windows, or laundry surfaces. Condensation equals poor ventilation and means the building isn’t “breathing” properly. You’re left with a significantly increased chance of a damp indoor environment, especially if you’re going to be unable to leave windows open for long periods of time due to either weather or security.

5. Peeling or bubbling paint on walls. This commonly occurs as moisture is seeping between the hard wall surface and the paint. If you see this, it’s a cause for concern and definitely an indication that there is rising damp. Typically the area above or below the paint will have a leak. 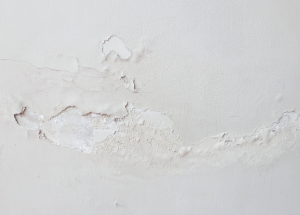 6. A musty smell. Most moulds have a pungent, musty odour. If there is a strong smell in the rental property this indicates that there is likely mould present coupled with poor ventilation and dampness in the room. Go into the wardrobes and built-in drawers and have a good sniff around. If there is synthetically perfumed clothing in the wardrobe that could mask your mould detective nose, then remove a drawer from the built-ins and sniff behind there (or get someone who isn’t prone to becoming ill to do so – My husband is our sniffer dog these days!)

7. You experience allergy-like symptoms. A good indicator is your body’s physical response when you step into a room. If you have sinus issues, coughing, wheezing, a tight chest, asthma triggers, irritated eyes, metallic taste, shortness of breath or a racing heart – to name a few, then this is a sure-fire sign that this is not the home for you. Be calm, take a few deep breaths if you can so that you rule out any fear and anxiety being the culprit, and if you tune in and feel these symptoms without a shadow of a doubt, then walk on out and into the next inspection.

8. Water stains on the exterior. If you notice that the exterior of the building has water patches or stains dripping down the wall then look for the root cause and question the real estate to find the source. Sometimes it’s just from rain or another tenant but if it’s a continuous dripping stream of water this is the ideal home for mould and damp to grow (especially if you live in a humid city). Avoid! 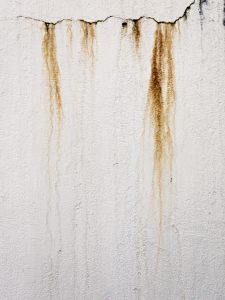 9. Moss growing on outdoor or porous surfaces. If you can see visible moss growing from brickwork this may not indicate that the building has a leak but it definitely highlights that the house is in a damp location. Be very discerning here – if the home feels musty inside too then you get a double no – run!

10. Poor drainage. Check the gutters around the property – are they clogged, dirty or mouldy. Clogged gutters mean drainage is not adequate and a cause for concern. If they can be cleared out you might be ok, however, if the overall state of the rental or home is not in good condition, don’t commit to it.  It’s a sign that the upkeep is poor and not prioritised, and you’ll face uphill challenges asking for things that aren’t in good condition to be attended to.

Another bonus trick I’ve employed when searching for a new mould-free home is to avoid any apartments or houses that are at the base of a large hill, or in a part of a suburb that is shaped like the base of a valley with hills coming up from the area from all sides. Homes on slopes tend to be bigger traps for foundation issues and rising damp and/or homes that are shadowed in large bushland/trees overhead. Typically these types of places experience higher levels of water runoff in storm periods, allowing for a greater chance of pooling water and water damage to occur. I’m now living in a location that is raised from the ground, free of tropical-humidity-trapping trees and less susceptible to the weather with good guttering and drainage. It can be done!

Aside from the visual cues you can look for at inspections, I highly recommend you arm yourself with some tools that you can take to do your own sneaky analysis when the real estate agent isn’t looking!

I use the Hygrometer for testing humidity in the air space and the moisture meter for testing damp in walls. Both will give you a near-instant answer if you’re still unsure about a place. When we moved to this apartment, hilariously my husband distracted the agent talking cars in the living room, while I went on a full Mission Impossible inspection of the rooms.

If you want to hear about my mould story you can listen to this podcast where I talk through the whole experience of moving from a water-damaged building a couple of years ago and how/what we cleaned and what we had to get rid of, sadly. There’s also this recent show I did, where I share tonnes more tips like in today’s blog to help you find a great place (tip 1: Be patient!).

If you’ve struggled with mould illness you might like to check out my course, Inflammation Ninja that I developed as a result of experience chronic inflammation after mould exposure which has now helped hundreds of people who have lived with many different types of inflammatory conditions and illnesses. 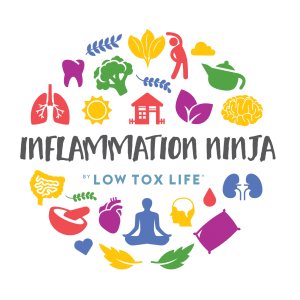 Has this list helped? I’d love for you to share your experience of trying to find your perfect safe home below!

I’d also love to recommend the book “Healthy Home Healthy Family” by multiple show guest Nicole Bijlsma which goes into detail about what you can do to create a healthy home. 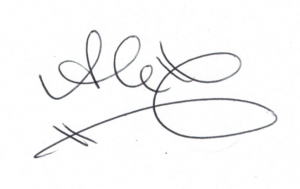