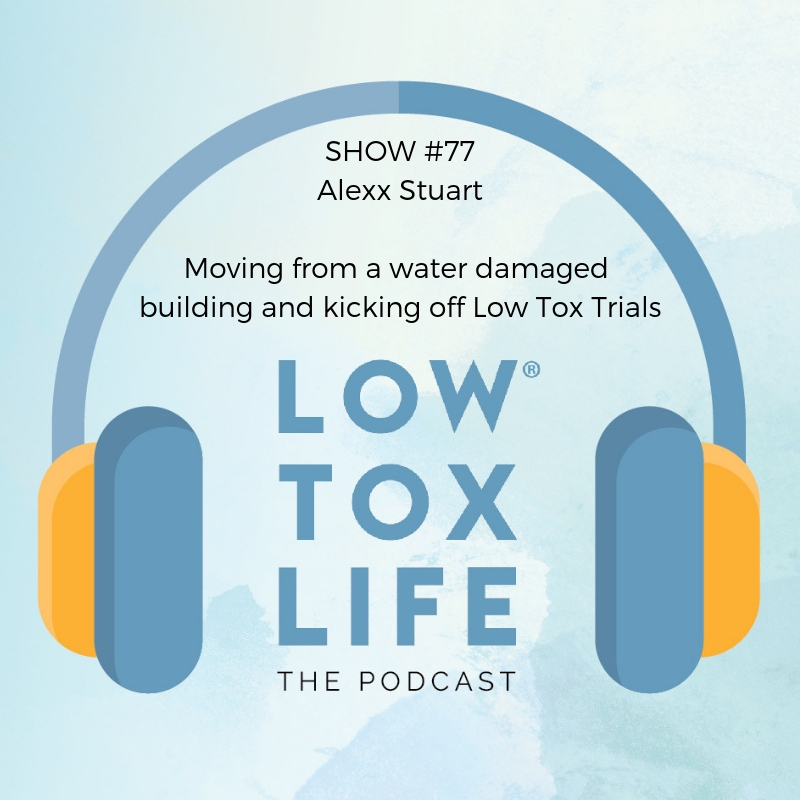 LISTEN TO THIS WEEK’S SHOW ON iTUNES, STITCHER OR SPOTIFY OR LISTEN RIGHT HERE:

Don’t be “in your show” where you see all the episodes, you won’t be able to do it. Just go to general podcast app and hit the search icon. Type in Low Tox Life. DON’T click on one of the single episode /shows that comes up, click on the Low Tox Life square tile. Once clicked on that, you’ll see 3 tabs: Details. Reviews. Related. Click subscribe, then click reviews and there you can write your review. 2 words, 1 sentence, biggest AHA… Doesn’t matter, just for you to leave one is so much appreciated and helps us stay visible in iTunes charts and Thrive. Thanks so much guys, Alexx x

Now onto the show…

This week I’m sharing a bit about what I did in my journey to finally realising my building was water damaged and moving home, as well as some of the decisions we made around leaving things behind, replacing them and NOT replacing anything that wasn’t essential. I share how I cleaned the lego, the clothes and the furniture that we were taking and what sorts of products I used. At the end of the show, I launch my first month long trial… The Low Tox life is always about gently building awareness around an aspect of life and stepping up where we can once we KNOW. This trial speaks to my desire to keep things spacious and light at home after all the decluttering as well as saving money to recover from the massive expenditure of couch and beds and moving and I’ll be asking myself this: Is it useful, beautiful or necessary? 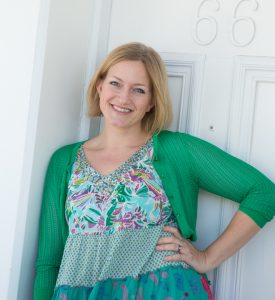 You’ll have to forgive me. While I’m thinking more and more clearly, I’m not there yet and I am a bit foggy brained still. Details are hard to organise and pin down. BUT, this is as comprehensive as I could think of in terms of what I did – please do ask me any questions you have in the comments. I will share the various treatment protocols that I experimented with soon.

Sprayed all lego and allowed to dry with Concrobium. Then washed in the dishwasher with 3 capsful of Thieves cleaner and 2 tsp borax. Triple angle zap, I called it. 2 bags, one in each side of the top of the dishwasher washed, and then sun dried up the hill at mum’s place as you can see… LEGO FOR DAYS… Too many older cousins hand me downs!! 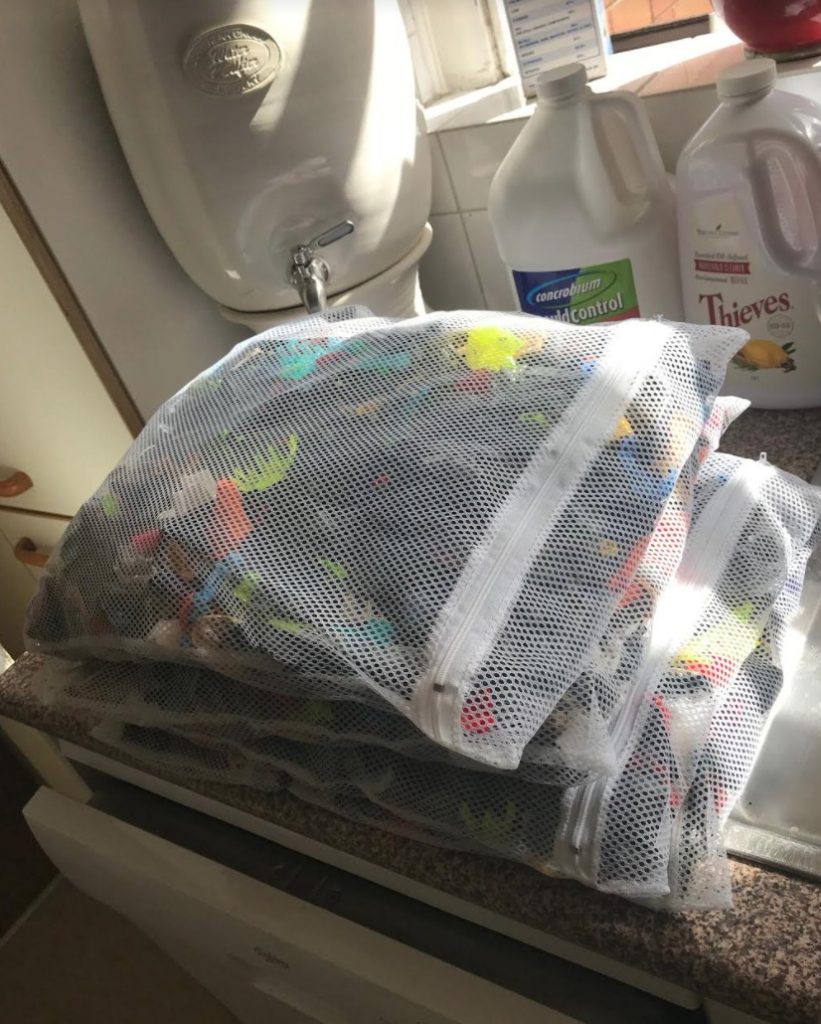 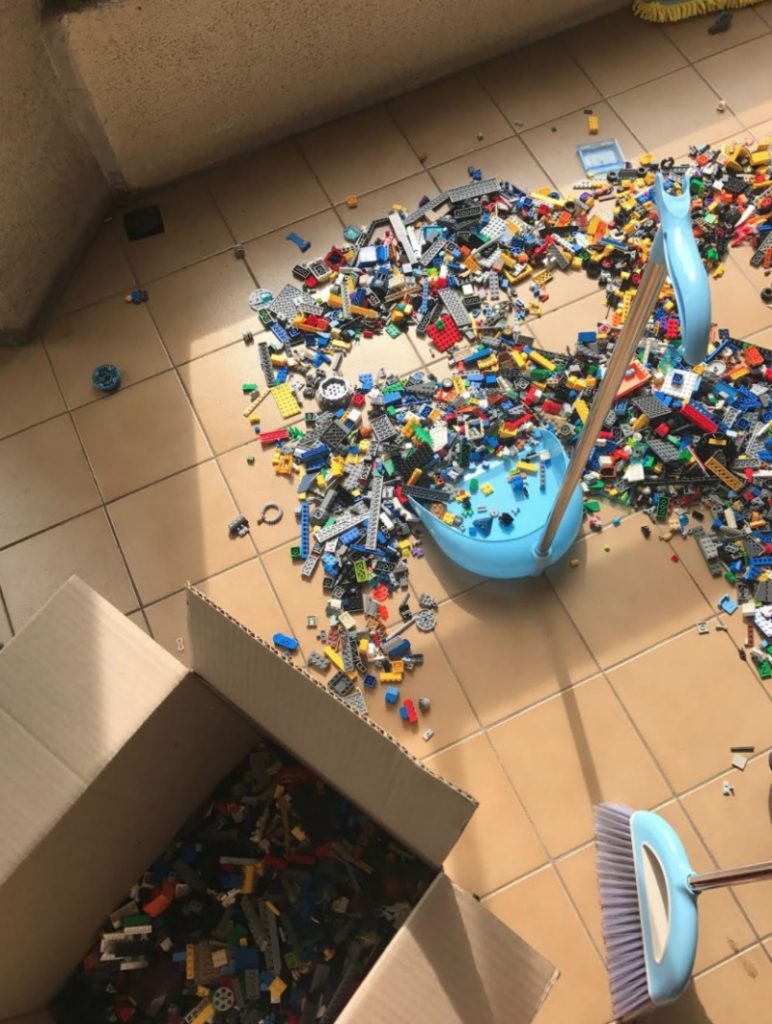 Sun dried lego at mum’s place – Gosh it was fun to do. NOT. hehe! Little man was very grateful though as I’m sure you can imagine.

There are people and blogs out there who frankly scared the bejesus out of me with how scary their situations sounded, how sick they got and how extreme they had to go to heal (hello, camping in the desert in a tent!) and sometimes the more I read the more confused I was. I also learned the further I went into things that, unfortunately, getting mould off your stuff is not an exact science. So I went with the sound advise of my practitioners, Nicole Bijlsma building biologist and in the end what sat right with me after having done all the research and taken in all the different points of view and different successes people had had.

Me in my suit! Hilarious to look at but I’m so grateful for how it protected me as I worked through everything in the old place. 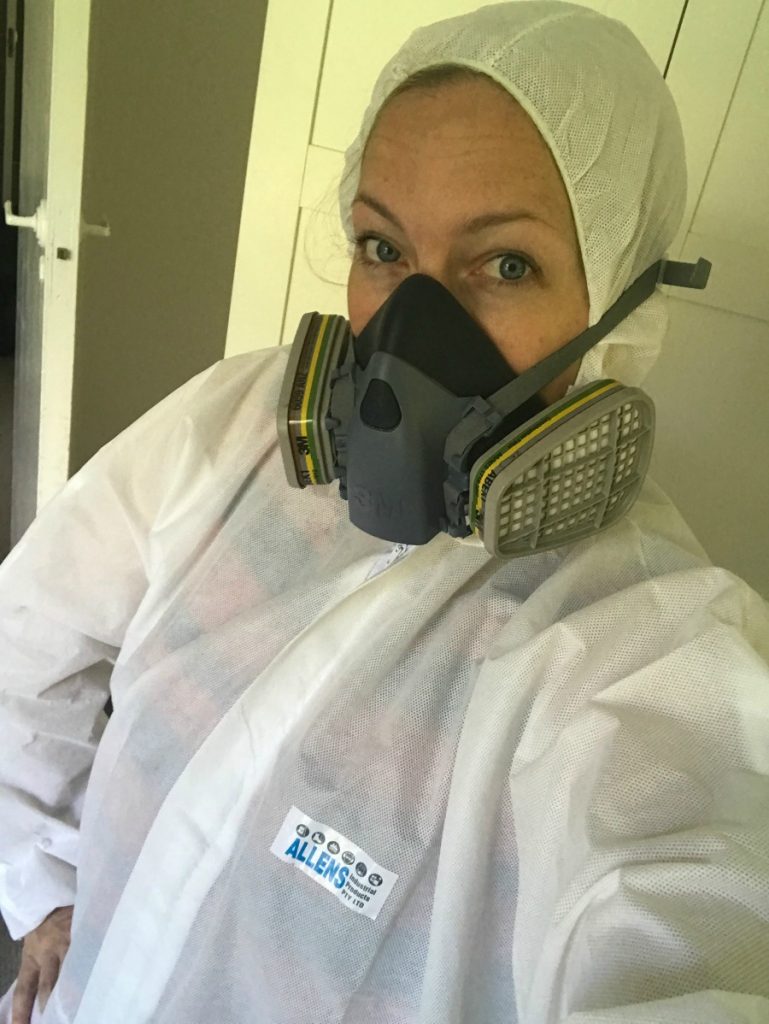 So there you have it – I’m sure I’ve left things out so ask any questions you have in the comments section. I will try to answer asap.

If you’re thinking you’re affected by mold, don’t delay. I did and it cost me my health for a year and a half in an acute way and mildly for years prior when I was sure something was up far sooner than I acted on it. I’m not one for regrets, but I am one for admitting if I had my time again, I’d have moved out as soon as I made the first connection between my weight and feeling foggy brained and our apartment, 3 years ago after I had tried everything else to lose weight living a meticulous lifestyle and countless practitioner protocol recommendations to feel sharper in the brain like I used to/knew I could feel.

Wishing you WELL because mould illness is horrible, but I’m also letting you know there IS hope and I will share what I learn along the way on my treatment protocol experimentations the past year and a half as well as the one I’m on now, very soon.

Enjoy the show and thanks again for taking the time to rate and review the show – it’s like tipping the bartender and it means the world.